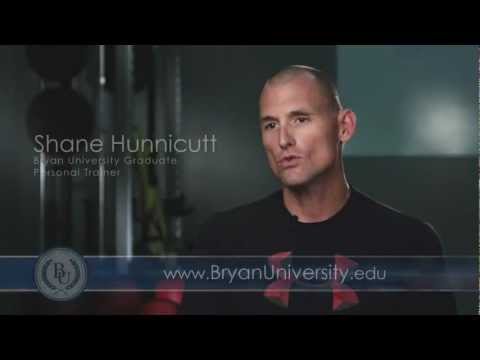 There’s never an idle moment for Shane Hunnicutt, a personal trainer and Bryan University graduate who’s currently shaking things up in Nashville, Tennessee. According to Hunnicutt, the fitness industry is just taking off in Nashville, motivating him to seek innovative ways to keep clients on the track to success.

“Everyone is getting busier,” he says. “Clients want a good workout and a good training session, but do not always have the time to schedule with a trainer in the gym, so I have found a way to work around busy schedules.”

Hunnicutt hosts “lunch and learns” at the YMCA and uses video conferencing to make sure clients stay motivated, even when they can’t make it to the gym. He's even gone so far as to contract with a local company to have high-resolution web cameras delivered to his clients, so there are no excuses when it comes to virtual training time.

Hunnicutt is no stranger to the benefits of video-conferencing for educational and motivational purposes, having received his degree through the online fitness program at Bryan.

“I decided to choose Bryan University Online because it was an accelerated course and the scope of the curriculum rivaled anything I had looked at previously,” he explains.  “The Bryan University program differs from other programs, because it is taught by real professionals, professionals that are actually working currently in the industry. They either own their own business or they work for well-known establishments.”

Super Hero in the Making

When asked about childhood heroes, Shane spoke about the comic book collection his father had given him and how he continues to collect comic books today.  Superman is by far his most beloved comic crusader. His love for Superheroes may influence his training style with clients, as those who stick with his programs generally end up with the broad shoulders, small waists, and the muscular legs most recognize as attributes belonging to members of the Justice League.

Keeping in Clark Kent character is difficult for Shane, as he is recognized in the training community as an innovator. He was recently asked to consult and work with the head of tourism in Metropolis, Illinois (the home of Superman) to pull together a Superman themed marathon that will support many nonprofit organizations.

Hunnicutt is moving faster than a speeding bullet to keep clients fit, but he’s also got his eye on an even bigger prize for himself. When asked about his dreams for the future, he admitted that he’d love to work for celebrity fitness-trainer Mark Twight, who trained the cast and crew for the movie 300, and more recently was responsible for defining the muscles for the Man of Steel himself, Henry Cavill.

While it may be a stretch to land a spot on Twight’s team, Hunnicutt is going the distance. He has already submitted his resume along with several demo videos to Twight, with the hope that he might be selected as leader of Twight’s Gym Jones Training Seminars, two-day workshops focused on intense training philosophy and methods.

So far, so good: Hunnicatt and has an interview scheduled with Twight in two months. With his super-hero attitude and motivation, it’s highly likely this is just the start of even bigger things to come for this Bryan University grad and superstar.